Roundtable discussion with Thai CSOs and HRDs on the 2nd draft text of the Human Rights Committee's General Comment No.37 on the freedom of peaceful assembly

CCPR Centre, together with International Commission of Jurists (ICJ) and Thai Lawyers for Human Rights (TLHR), has organised an informal roundtable discussion with Thai CSOs and HRDs on the freedom of peaceful assembly. The discussion took place on 26 November 2019, with support of, among others, the British Embassy Bangkok. It was participated by 12 CSO representatives and individula HRDs who are dealing with and specialising on the issue of the freedom of peaceful assembly.

The main focus of the discussion was the 2nd draft text of the new General Comment (No. 37) of the UN Human Rights Committee (HR Committee), which was published by the Committee in November following the completion of the reading of the 1st draft text at its 127th session (14 October - 8 November 2019). Updates on the current status of the drafting process as well as relevant information, such as modality and timeframe for civil society contributions to the Committee, was shared by the CCPR Centre's Asia Pacific Coordinator at the start of the discussion.

Comparing it with the actual situation on the ground, participants have discussed among others: what information they can provided to the Committee to contribute to the improvement of the text of new GC; how they can already use elements of the draft GC in their work; and how in a longer term they can utilise the new GC, when it's adopted by the Committee, in their advocacy for the better protection of the freedom of peaceful assembly in Thailand.

Participants have agreed to prepare joint inputs to the Committee in accordance with its call for contribution by stakeholders by 14 February 2020. As not so many stakeholders in general were aware of the drafting process of new GC, its content and the possibility of stakeholders' contribution, the discussion provided timely and useful opportunity for participating CSO and HRD representatives to interact and coordinate each other. Furthermore, it also reaffirmed importance of Committee's General Comment as well as its potential impact on the improvement of the freedom of peaceful assembly on the ground. 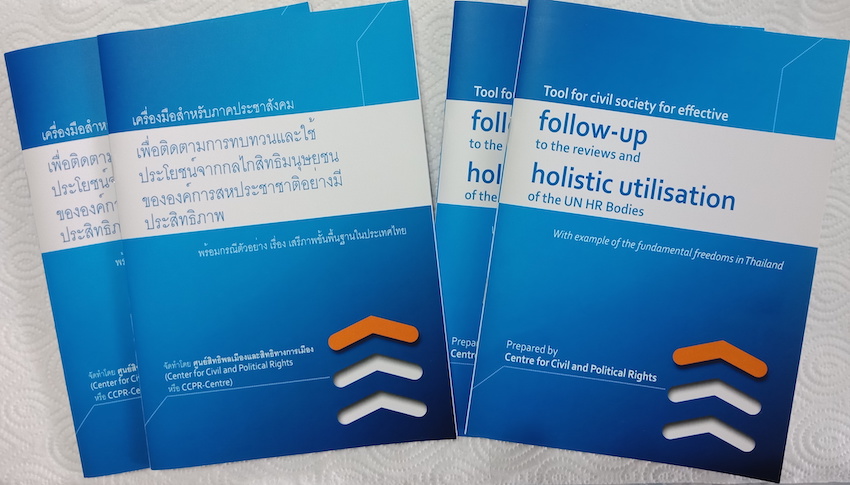 Tool for civil society for effective follow-up to reviews and holistic utilisation of UN HR Bodies: with example of fundamental freedoms in Thailand

A country visit of Mr. Yuval Shany, Vice-Chair of the HR Committee, to Thailand following up Committee’s Concluding Observations