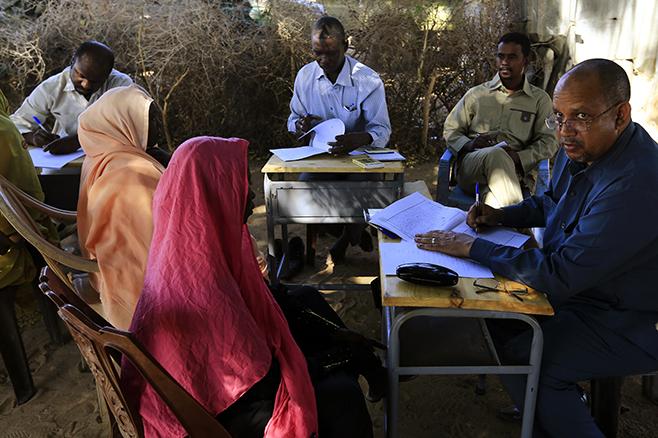 Special Prosecutor for Crimes in Darfur Yasir Ahmed Mohamed (R) and his team talk to women during an investigation into allegations of mass rape in the village of Tabit, in North Darfur, November 20. © 2014 Reuters

On 9 and 10 October 2018, the Human Rights Committee reviewed Sudan’s Fifth Periodic Report. The delegation of Sudan opened the session by identifying various laws the State had adopted, as well as the establishment of an independent national human rights institution.

"“Article 27 of the Criminal Code in Sudan needs to be amended urgently”."

- Yahd Ben Achour, member of the Human Rights Committee, on the methods of execution accepted in Sudan

Discrimination based on Religion

Christof Heyns, Human Rights Committee member, started the questions by asking what the adoption of these laws meant in practice. He raised various concerns, including discrimination based on religion. The delegation, responded to these concerns by stating with confidence that religious hatred did not exist in Sudan, and that Christians and Muslims coexist peacefully, despite reports from civil society stating otherwise.

Many members of the Human Rights Committee were concerned with the conduct of security and police forces, as well as their immunity from prosecution. The Committee identified cases of arbitrary and lengthy detention, enforced disappearances, torture and ill treatment of detainees by police. With the immunity given to police and security forces, they cannot be

The delegation insisted that despite these facts, this mechanism still remained independent. The Committee responded in the next round of questions by stating, “Unless the Sudanese human rights institution is reformed, it cannot be relied on”.

Death Penalty and Right to Life

Ben Achour, “Article 27 of the Criminal Code in Sudan needs to be amended urgently”.

Yahd Ben Achour, member of the Committee, expressed concerns about the accepted methods outlined in Sudan’s criminal code to apply the death penalty, such a stoning and crucifixion. He pointed out that these methods are not only violating the right to life, but also constitute acts of torture.The State delegation responded by ensuring that these methods have never been used in the modern history of Sudan. The Committee then asked why the law could not be changed if it was no longer compatible with reality.

FGM and Discrimination Against Women

Committee member, Sarah Cleveland expressed concerns over various issues relating to the discrimination of women and inequality between men and women.  She raised key issues, such as rape, polygamy and child brides. Specific examples were identified, such as the mass rape of more than 221 women and girls in Tabit in 2014, and the impunity of perpetrators related to this. The State did not respond to this question, but maintained that women have the right to allow or disallow polygamy in the marriage contract. Another major concern was the fact that up to 37% of girls are married before the age of 18 and drop out of school. In some cases, girls are married off as young as 10 years old. The Committee asked the State delegation if they intended to raise the legal age of marriage to 18.

The issue of female genital mutilation (FGM) and the urgency of resolving it was stressed by Duncan Laki Muhumuza, Committee member. He asked what measures the State had taken to combat this problem and what the effects of these measures were. The delegation asserted that in many states of Sudan, FGM had been totally eliminated through popular initiative such as national campaigns and laws. For some people, enacting female circumcision is a means of their income, and the State plans to develop alternative professions for them. The delegation noted that this had been a challenge in overcoming FGM.

Treatment of Migrants and Refugees

The treatment of migrants, aliens and refugeeswas another key issue throughout the session. The Committee expressed concern about the huge number of refugees in Sudan and reports on cases of ill treatment, mass deportations and trafficking of such persons. The delegation denied all accusations and responded by saying there have been no such cases and that they have various laws protecting the rights of refugees, in addition to the ICCPR.

Lastly, the Committee was also concerned about the criminalisation of the act of two consenting adults engaging in same sex relations. The delegation responded to theissue of homosexualityby stating it contradicts the Sudanese culture and religion and that this was not up for compromise. They added that the law to criminalise this is there to “protect society”.

In the delegation’s closing statement, Sudan expressed its commitment to cooperating with the Committee to help overcome human rights violations in the country and stated, “We are not an isolated island, we are part of the international community”.

By 2 November 2020, the State party should provide information on the following recommendations from the Committee's Concluding Observations: