On 29th, 30th June and 1st July 2021, Togo underwent its fifth periodic review by the Human Rights Committee on the implementation of the ICCPR. The session took place online due to the extraordinary sanitary circumstances caused by Covid-19. The Covenant was ratified by Togo in 1984 and the State’s last review had taken place in 2011.

"Since the last time we were before the Committee, there has been undeniable progress in our country. However, we are aware that significant challenges still remain, particularly the ongoing implementation of the recommendations issued by Human Rights Mechanisms."

The State Delegation of Togo opened the review by pointing firstly to the recent legislative developments as well as to the 2019 Constitutional Reform which had strengthened the national institutions and the enjoyment of civil and political rights. Regarding the specific issues on the implementation of the ICCPR , the Delegation’s statement focused on the following points: an ongoing progress of empowerment of women in public life; prohibition of torture in line with article 7 ICCPR; the continued criminalisation of same-sex relationships; re-organization of the legal system to improve the independence of the judiciary and the impartiality of justice; and the 2019 amendments to the law governing freedom of assembly.

Even though Togo has undergone significant progress since its last report, several improvements were still required under the ICCPR. In particular, the Committee raised its concerns about the transitional justice model, especially regarding the lack of truth obtained by victims and the impunity of perpetrators of the 2005 violent events. Corruption and the independence of the judiciary, excessive use of force by security forces, violence and discrimination against women, or substantial restrictions to freedom of assembly were other important issues raised by the Committee. These were in line with the main priorities of Togolese civil society: impunity, political prisoners and the shrinking civic space in Togo.

The webcast is available here: Part 1, Part 2 and Part 3

NGOs in Togo raised as one of their main concerns the impunity of perpetrators of the grave violations of human rights that took place in the State in 2005. An important number of victims obtained reparation by the state, but most of them lacked truth as perpetrators were still not identified.

Although already addressed in the Concluding Observations of 2011, the Committee raised the issue again to the Delegation. It stated that, from the three pillars that compose a transitional justice model (truth, justice and reparation), only reparation had been addressed by the State and not satisfactorily. More specifically, the Committee asked about the way in which victims obtained the truth vis-a-vis past crimes and about the state of play of criminal proceedings. The Committee insisted that reparation and truth should be adequately provided for by the state and not left at the families’ expense, as it could lead to impunity.

The Delegation ensured that truth had been established by hearings held by the Truth, Justice and Reconciliation Committee. However, given the period of time already passed since the violations and the difficulty to identify their perpetrators, they had opted for a system of reconciliation based on reparative justice rather than on criminal justice. This meant that victims were entitled to obtain individual compensation for the human rights violations and, if not satisfied, resort to courts. Nevertheless, even if over 8700 victims obtained reparation according to the Delegation, the identity of perpetrators remains unclear in the majority of cases, leading to lack of truth and impunity, as claimed by several NGOs.

Corruption and independence of the judiciary

According to the 2019 World Corruption Watch, 55% of Togolese people think justice in the country is corrupted and 75% think corruption had increased in the preceding year. In view of it, the Committee requested information about any measures adopted by the State in order to fight corruption - especially among the judiciary, as the public perception of judges being bribed by lawyers exists. The Committee also asked the Delegation about any intended reforms of the judiciary, given the odd disciplinary procedures involving judges and the lack of autonomy of the public prosecutor office.

The Delegation alleged that the independence of the judiciary was ensured by the constitution and the different procedures of appointment of judges on the bench and in the public prosecutor office. However, the Organic Law on judicial appointments is under review to improve it. The Head of Delegation emphasized the robust anti-corruption mechanisms and the relatively high number of penalties, including for high-ranking public officials. He also presented the recent launch of a strategic plan to fight corruption which was subject to analysis in the subsequent 10-12 month frame.

The Committee raised its concerns about the recent executive bill amending the 2011 Act on freedom of assembly. The amendment imposed substantial restrictions on this right, limiting for instance the freedom to assemble in public places or during certain time frames. After four UN Special Rapporteurs had sent a communication to the Togolese Government in 2019, the Committee insisted on the disproportionality of the law and requested the Delegation for any possibility to repeal the law and lift restrictions incompatible with the Covenant. The Committee also requested information regarding the civil society organizations involved in proposing amendments to this bill. Moreover, the Committee also raised its concerns about freedom of association regarding the procedure to receive formal acknowledgement by the state and its compatibility with ICCPR and a democratic system.

The Delegation justified these restrictions on the rights to association and assembly as a necessary check by the government to prevent gatherings with a terrorist or criminal goal. Regarding the formal acknowledgement for associations, the Delegation stated that it was compatible with ICCPR as it awards them with legal status so that they can exercise their activities freely. According to the Delegation, this formal check was justified as these associations are often used to cover up criminal, money laundering or other illegal activities, and serves to preserve the safety of the population.

However, according to civil society, it is a way to shrink civic space in the country, even before Covid-19 disrupted public life.

Concluding observations on Togo’s 5th periodic report were released the 29th July 2021. The State party was required to send, by 23rd July 2023 at the latest, information on the follow-up given to the following recommendations: 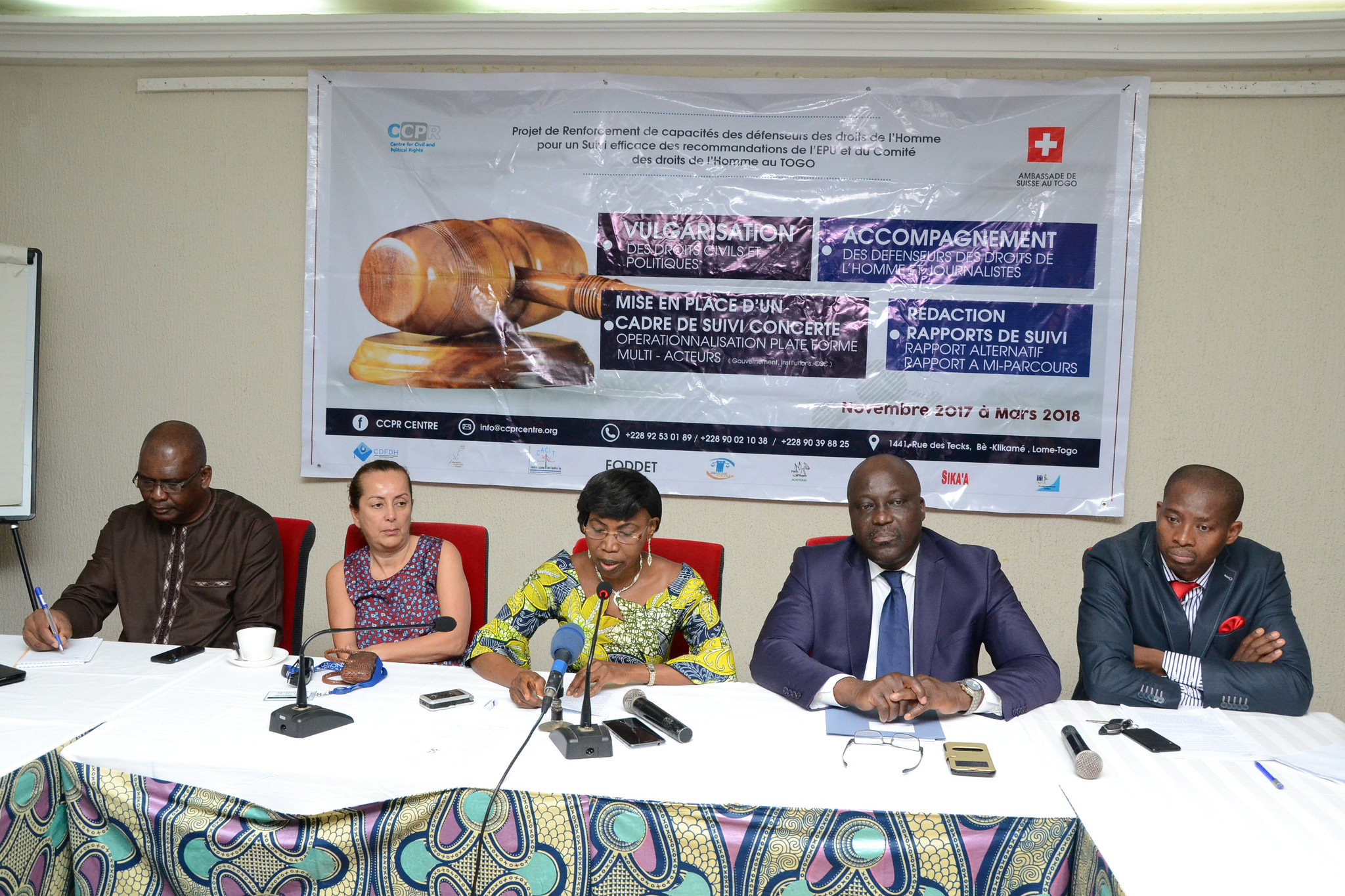