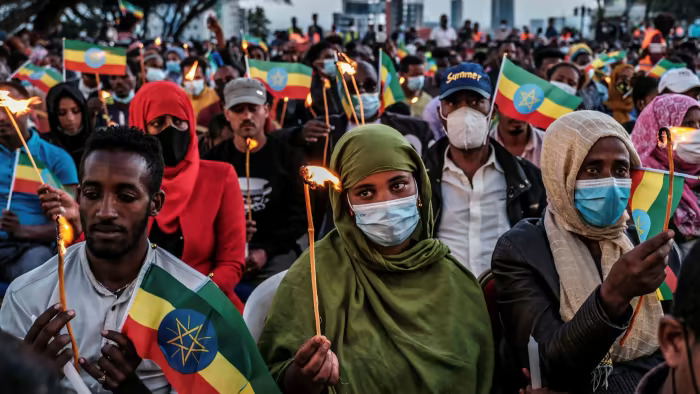 Memorial service for the victims of the Tigray conflict in Addis Ababa, Ethiopia. By Eduardo Soteras/AFP/Getty

The Human Rights Committee reviewed the second periodic report of Ethiopia on 11 and 12 of October 2022. CCPR-Centre conducted a preparatory mission in Ethiopia in September 2022 to inform civil society organizations, to coordinate their engagement, and to support the drafting of reports for the Committee’s 136th session.

In the opening statement, the State delegation considered the difficult context of Ethiopia, with three rounds of vicious wars and a former ruling political party. They also mentioned the tremendous suffering caused by the armed conflict in the Tigray region, which resumed after the Tigray People's Liberation Front (TPLF) violated the ceasefire established in 2021, and that the government of Ethiopia had always been ready to reform matters with TPFL. The delegation stressed the political will of the government to investigate perpetrators of grave human rights violations from both sides, and the fight for human dignity.

The Tigray conflict was a recurring topic that shaped the entire context of the dialogue. Key issues mentioned were sexual and gender-based violence and violence against women, the high number of arbitrary arrests and conditions of detainees, the rising ethnic tensions and conflicts in different regions of Ethiopia, and extrajudicial killings in the country.

Committee member Hélène Tigroudja mentioned violence against women in Ethiopia, with the most concerning topics being marital rape, polygamous and early marriages, and female genital mutilation (FGM). The Committee asked about the measures taken to remind all parties of the conflict of the need to protect civilian population against all forms of sexual and gender-based violence.

In this regard, the delegation replied that polygamic and FGM practices are criminalized. They follow a strategy of shaping public attitude through awareness-raising education, with  promotional activities to disseminate the illegality and adverse effects of such harmful traditional practices. Moreover, various surveys conducted by the government indicate that the practice of FGM is decreasing, from 70% of women in 2005 to 65% in 2016. Regarding gender-based violence, the government has initiated a study to prepare and put in place a comprehensive legal framework. As for marital rape, they acknowledged that it is considered an exception to the legislation that criminalizes rape, but a national study concerning the gaps in legislation including in issues of gender-based violence and marital rape is underway.

Arbitrary detentions and liberty and security of persons

Liberty and security of persons was also an issue of concern for the Committee. According to information received, between November 2021 and February 2022 there have been at least 11,000 arbitrary arrests in Ethiopia, including human rights defenders and journalists. The Committee asked about ensuring full access of ICRC and local NGOs to prisons to assess the conditions of detainees.

The delegation replied that pretrial detention was an exception in Ethiopia. They mentioned that, through the years, they had taken various measures to enhance the human treatment of detainees, with the expansion of all detention facilities, the access of prisoners to health care and other essential services, and capacity building training given to prison administrators. Moreover, human rights institutions had unlimited access to the facilities to visit the detainees, though, according to civil society, they needed prior authorizations for that, which would hamper the unlimited access.

Lastly, rights of minorities were mentioned. Ethnic-based killings by security forces and armed groups in Ethiopia have been widespread since 2018, and according to information received 450 Amharas were killed in the Oromia region on June 18 2022. The Committee stated that there seems to be no limit in the scale or amount of the violence, with victims ranging from newborns to the elderly, and asked about the measures taken to address ethnic tensions and conflicts, and to protect IDPs.

The delegation replied that Ethiopia never targeted civilians based on their identity, and that it was rather the TPLF who introduced ethnic-based tensions in the country and tried to spread violence among the groups. Nevertheless, according to independent reports, there are war crimes being committed on all sides of the conflict. Moreover, the Constitution of Ethiopia expressly gave equal recognition to all ethnic groups. Regarding refugees, the delegation replied that the crisis was a huge responsibility beyond the capacity of the country, and called on the international community to assist Ethiopia to address the challenges.

Watch again the dialogue with the Committee here (part one) and here (part two).

Concluding Observations on Ethiopia second periodic report were released on 3 November 2022. The State party is requested to provide, by 2025, information on the implementation of the following  recommendations:

Violence against women and harmful practices

Right to life and protection of civilian populations

The State party should ensure that everyone can freely exercise the right to freedom of expression, in accordance with articles 19 of the Covenant and the Committee’s general comment No. 34 (2011) on the freedoms of opinion and expression. In doing so, it should:

The follow-up report of Ethiopia on the implementation of the recommendations is due in 2025. The next list of issues will be adopted in 2028, and the next periodic report is due in 2029.