Special event on corruption and human rights at the COSP, Abu Dhabi, 18 December 2019

The COSP is organised every two years, and brings together not only State delegations, but also civil society working on corruption and asset recovery. That is why the COSP was the perfect place to launch the Practitioners’ Guide for the second time.

"The implementation of the Convention Against Corruption inevitably touches upon human rights issues." 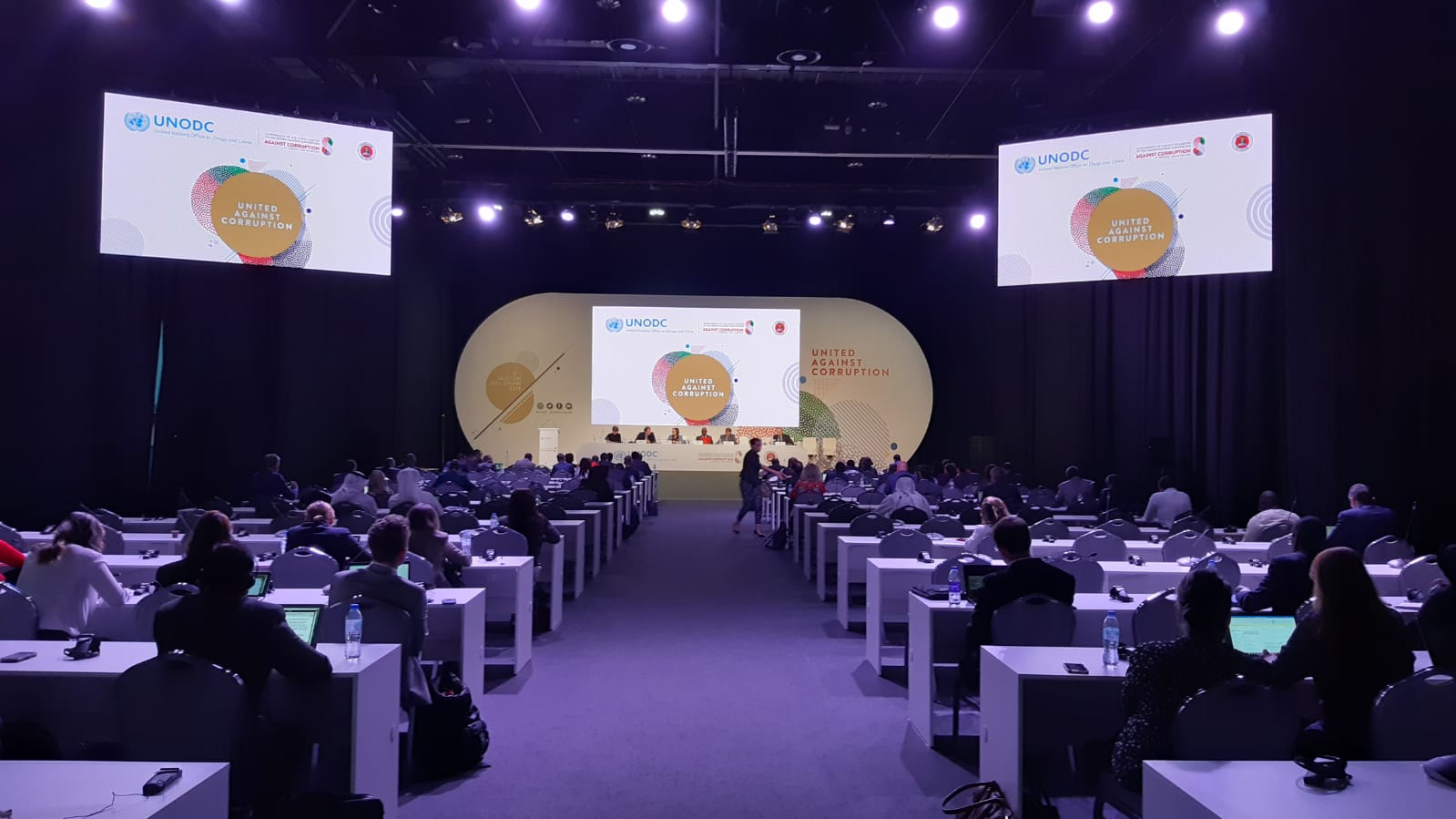 A special event was organised by the Geneva Academy, the OHCHR, the Swiss Federal Department of Foreign Affairs, UNODC and others on 18 December. The panel spoke about human rights, gender and corruption – linkages, good practices, potential and limitations.

The first speaker spoke about the contribution of the Kingdom of Morocco for introducing corruption on the agenda of the Human Rights Council. He presented the resolutions that the Human Rights Council has adopted on this issue, and stressed the need for an independent expert focusing on the link between corruption and human rights. Jennifer Bradford from UNODC explained what linkages there are between the UNCAC and international human rights law, and how the implementation of the UNCAC can support the implementation of human rights. Charles Ayamdoo shared his experience of the Commission on Human Rights and Administrative Justice in Ghana in increasing the awareness of the negative impact of corruption on human rights and promoting gender equality.

H.E. Stefan Estermann represented Switzerland during the discussion, and he spoke about the potential of mainstreaming the anti-corruption and human rights agendas, with the Practitioners’ Guide as a good example of this linkage. Làzarie Eeckeloo from CCPR-Centre then presented the Practitioners’ Guide, explaining the process of how it came about and the reasons why it was developed in the first place. She also explained why the Frequently Asked Questions were developed and why it was important that both documents were disseminated throughout the COSP. Lastly, the last speaker, the Independent Expert on Debt and Human Rights mentioned how illicit financial flows and human rights are interlinked. The flyer is available here.

The event was very well-attended, with approximately 120 people in the room, showing that this topic is of utmost importance and interest to those attending the COSP. It allowed us to share our work and experience with anti-corruption experts, civil society organisations and State delegations focusing on corruption from all over the world.

Training for civil society representatives at the COSP

During the COSP, the Centre organised two trainings: one specifically targeted to civil society organisations working on corruption in the MENA region, and a general one for all those that are interested in the matter. Both trainings started by giving an explanation about the existing UN human rights mechanisms, charter-based as well as treaty-based, and continued by giving an overview of how the Treaty Bodies have approached corruption in the past. This led the discussion to the reason why the Practitioners’ Guide was developed: to increase reporting on corruption-related human rights violations to these bodies. The training continued by going over the possibilities to submit reports: before the adoption of the List of Issues, as a reply to the List of Issues and as a follow-up report.

Moreover, the recently developed website on the Centre’s activities related to corruption, was shared with the participants. The first training was attended by 12 civil society representatives from Morocco, Iraq, Jordan, Lebanon, Bahrain, Kuwait, and others, which allowed us to have discussions about specific country situations and reporting status. The second training included participants from Transparency International Chapters, the UNCAC Coalition and UNODC.

A great advantage of holding these trainings at the COSP was the fact that we were able to disseminate our work to a wide range of civil society representatives working on corruption, some focusing on country-specific situations, and some with a regional angle. Most of the participants had never participated with the human rights mechanisms before and appreciated the fact that they were now aware of a possibility to bring corruption forward as a pressing issue before the UN Treaty Bodies.